The logo design should be simple, iconic, and memorable in order for the brand to be recognized and interacted with in the future.

Are you guilty of the seven most common logo design mistakes? Logo designs should stand out for the right reasons for the brand to be recognized and interacted with in the future.

The usage of logo cliches not only prevents this from happening but as discussed in this article, many of them look plain horrible, beginning with the tree people style logo, as with many other terrible cliches.

The logo design should be simple, iconic, and memorable, but for some reason, people want to use windows in logos such as construction or real estate.

The designs shown are obviously logo templates that anybody can buy for ten dollars. This type of logo design tree can be found on the internet. The human tree or tree people logo may have been novel and new at one point, but it's now so overdone that it's become an eyesore.

No business that takes itself seriously will want to have a logo like this. The logo should be simple and iconic and memorable.

The next common logo design mistake is adding windows in the logo. People decide to throw in windows onto things like construction or real estate logos. Always remember to refine your designs down to a simple iconic solution. 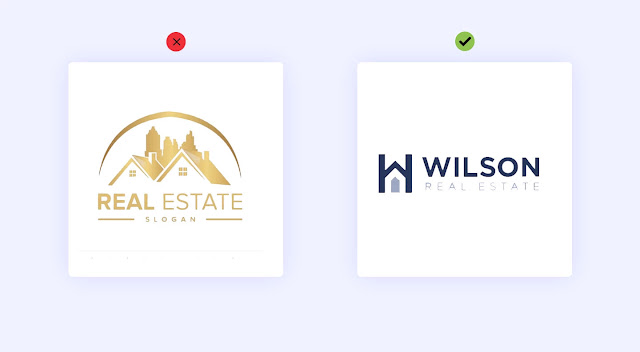 Look at how this cluttered design with the windows compares to a more elegant and more simple design based on the same subject matter. There is no real competition or comparison.

Now I don't know how this one has become a cliche, but it is really quite bad. It's something that many beginners designers do and are to take two letters from the brand's name and overlay them.

This concept has no bearings on the identity of the brand and it doesn't evoke a feeling or personality. Just nothing it's also not memorable so please do stay away from this logo always as a cliche or better yet stay away from all the cliches.

However, the double letter logo can be done pretty well with some creative flair which will bring it out of that cliche

The light bulb concept is no exception now that a light bulb represents a spark of inspiration or an idea. But it has been so overdone that has a logo design. Now just resembles more of a broken attempt at being creative.

I would find it almost impossible these days to have a situation where a light bulb would be used in a logo the fifth logo design cliche to avoid is maybe the most common on today's list.

You will notice it literally everywhere online it is the arc logo. This is typically where a few letterforms have an arc that swooshes or swoops through the middle and divides the lettering.

This is so overdone that it's become ridiculous if your client has a logo like this their business is likely to drown in a sea of arcs.

The next cliche is often a lazy attempt to stand out by the designer. But like with all cliches the designer probably doesn't even think much about the brand's identity or even the brief.

It's just a case of slapping a few colored dots onto the logo and yeah everything should look fine. This looks generic and well just a cliche. It can be done effectively of course but why even bother when it's been so overdone countless times.

Before also you need to consider that if the logo is scaled down to a very small size having a large number of small dots isn't going to translate too well.

The next cliche to avoid when designing a logo merges
two of my pet peeves into reflections and gradients sure reflections were cool back in the 1980s.

When people were first discovering the internet, but 40 years later it's a no-go for me having that reflection at the bottom of your logo does not look good.

It looks pretty dated so try to avoid this one at all costs.  I've been guilty of it myself as well in the past
heck. I've probably designed logos with most of these cliches in them at some point.